In all the three tutorials i.e. Basic, Intermediate and Advanced, we have used cucumber project template and used it and wrote our scenarios. However we never got a chance to talk about the overall project structure and why a certain file/folder exists the way it is structured. Obviously there is some convention (meaning a rule is defined) and there is some configuration (flexibility to modify some rules through configuration). In this post we will first talk about the folder structure we adopted all through the tutorials and set a stage, so that we don’t have to worry one fine day – Hmm, what is the purpose of this Rakefile for example? 😉

Compared to other programming languages, Ruby is generally readable and easier and so the folder structure is also less authoritative, though a very noteworthy observation not to miss before we go into frameworks discussion. Below is a high level illustration. I will explain below in addition to the call outs. 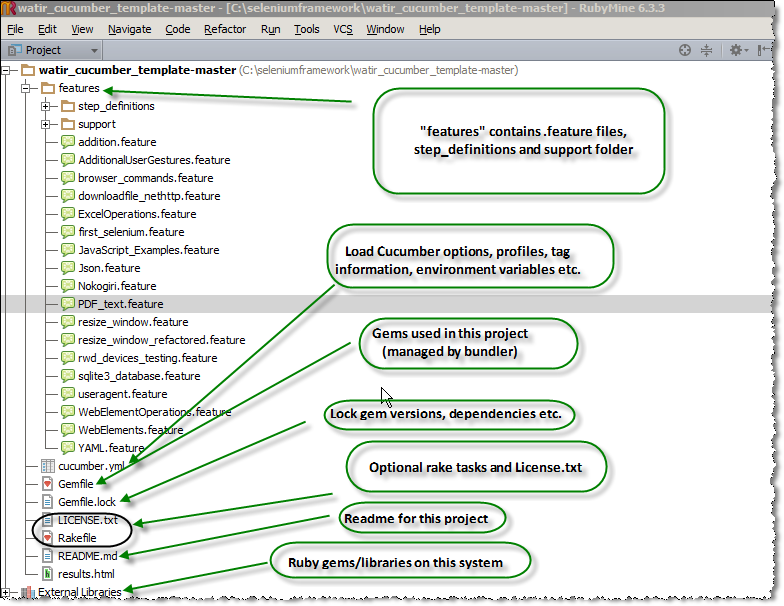 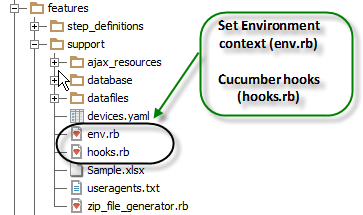 When Cucumber is run, there is a certain sequence of events that happen before the actual scenario is run. All ruby code under support folder gets loaded into the ruby runtime context. Hence we would want to load up all gems and their modules in the env.rb file as below for example.

It is important to note here that we can externalize any ruby code and then include it in context, by using env.rb file. For example, I can have my ruby files in a completely different folder, however if I intend to use them, then I have to include it in env.rb. When we discuss frameworks in details,we will talk about re-usability and how we can keep ruby code in separate folder and include those modules/classes into the current project and some other cucumber project too.

Similarly, hooks.rb also gets loaded. We will discuss advanced options for hooks.rb when we talk about Cucumber hooks in a separate post. Think of hooks.rb as pre-condition and post-condition activities for test cases. We do this with Before and After block as follows for example: