Now that we have covered 3 types of frameworks, each one incrementally building on the top of the other, let’s take a pause here and discuss what are some pitfalls and caveats.

DO NOT BUILD too many LAYERS with GEMS

I blogged about this a while ago especially around over abstraction and building layers and layers of abstraction. Here is the full blog entry. The summary is as follows:

In the Test Automation space with browsers , Selenium definitely is the leader at this point. The API’s exposed by selenium are in multiple languages and in ruby, the “real gem” is selenium-webdriver. 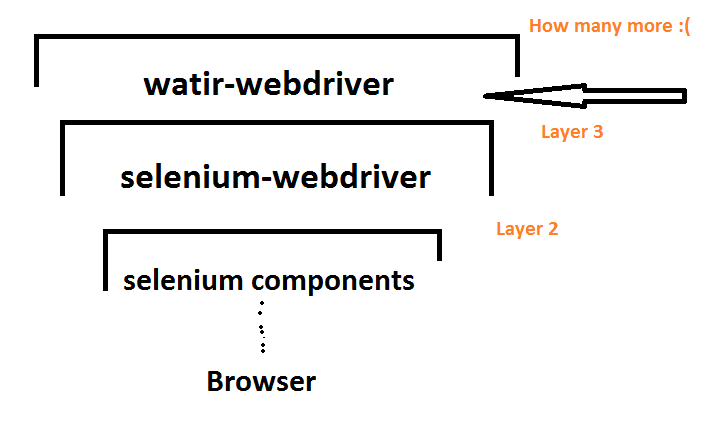 Too less abstraction: There are forces acting in opposite direction i.e. with too less layers, we have to write too much amount of code and have to sweat a lot to implement a simple functionality on application layer.

Too much abstraction: This is the one I want to focus on here with this caveat because I see too many gems on top of watir-webdriver and selenium-webdriver being implemented in the Ruby world. One of the major issues is the time it takes to debug, when things fail. Especially if the layer is NOT well built with exception handling and does NOT propagate the error up for easier root cause detection.

That is why on this website, we strove and built Page Object pattern using plain Ruby concepts

We DO NOT want to use more and more gems [thereby building more layers] and having dependencies that “will” become PITA over time.

It has also become more of a fashion statement for some folks to say “I can write a gem“.

Guys, if you hear this, raise your ears and evaluate properly before falling for this trick.

One of the strengths of Ruby world is “being humble”. Matz is humble, so we are ! I am sure you know that statement. Anyways, lets move on.

I highlighted the pitfall with a graphic below. 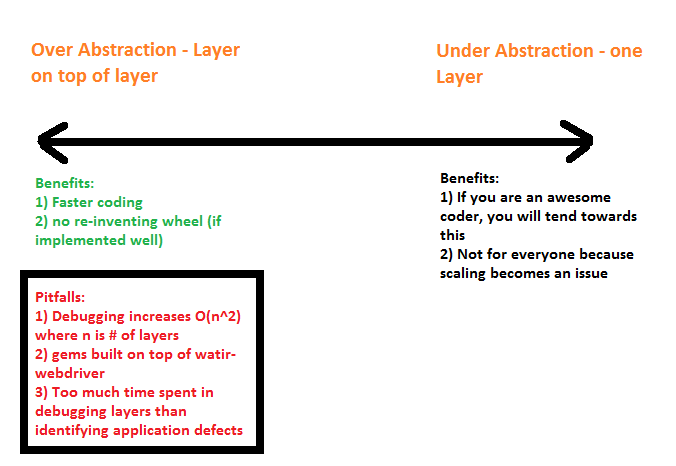 Page Object framework has its limitations.

There is often a misconception on the Test Automation world that Page Object framework is magic and can solve all problems and that is the answer for all browser automation issues. I would like to highlight the following to that notion.

So summary is to say: If you are spending too much time on building the test Automation framework itself and fixing issues there, then when would you have time to focus on uncovering application defects?